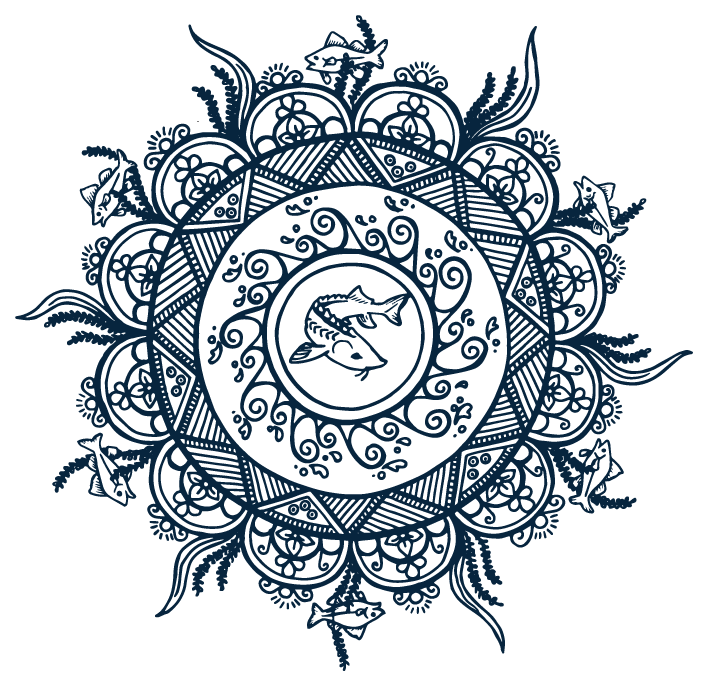 We turn our minds to the all the Fish life in the water. They were instructed to cleanse and purify the water. They also give themselves to us as food. We are grateful that we can still find pure water. So, we turn now to the Fish and send our greetings and thanks.

Now our minds are one. 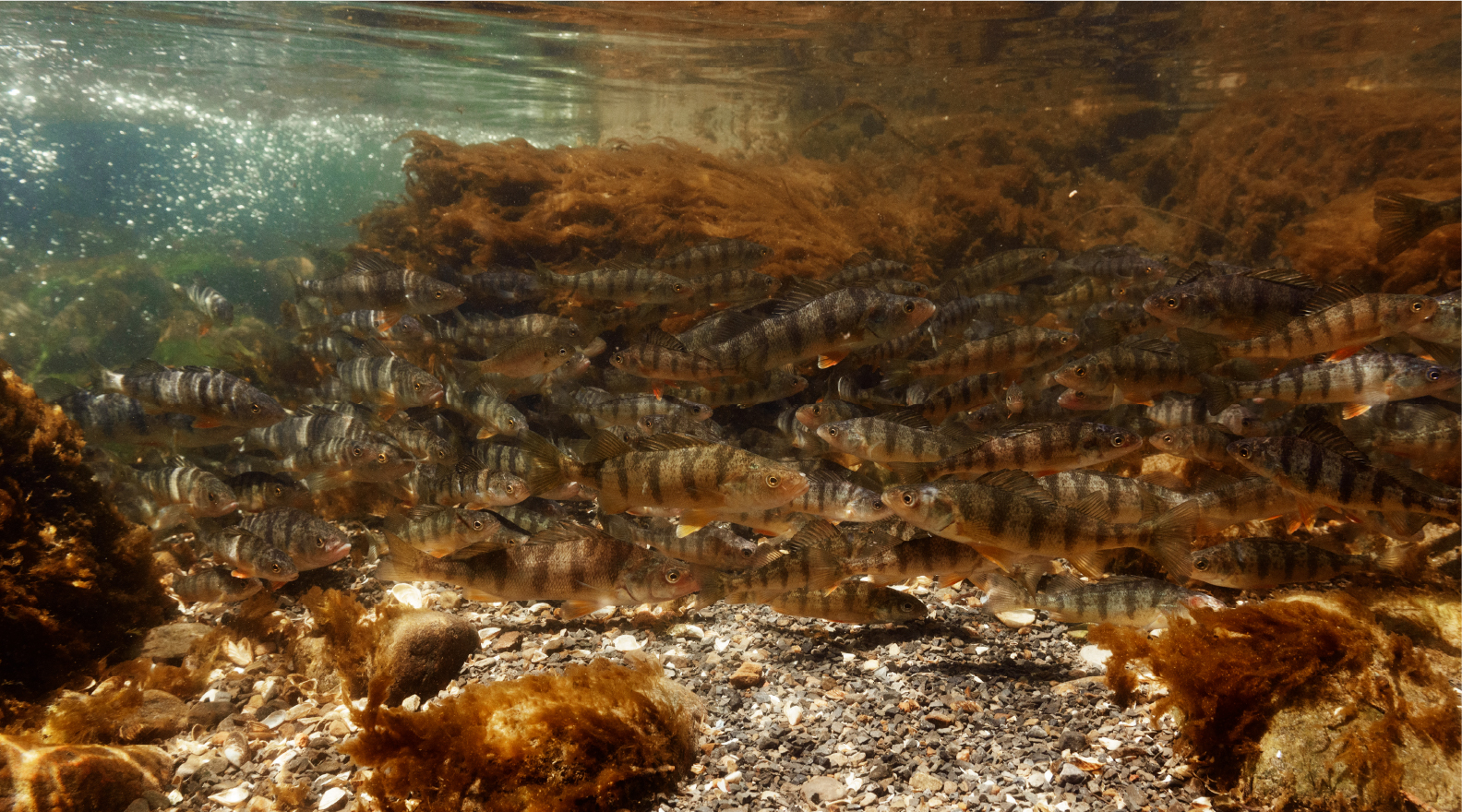 Opposing trends are present in Lake St. Francis, however, with yellow perch abundance decreasing in the Ontario portion of the lake, and increasing in the Quebec portion—potentially reflecting differences in fisheries management between the provinces. Other factors, such as double-crested cormorant predation, also likely affect yellow perch populations but to a lesser degree than nutrient concentrations and fisheries. The river is changing and so is the carrying capacity for yellow perch. Fisheries regulations need to account for these changes to ensure that yellow perch populations are maintained in the future. 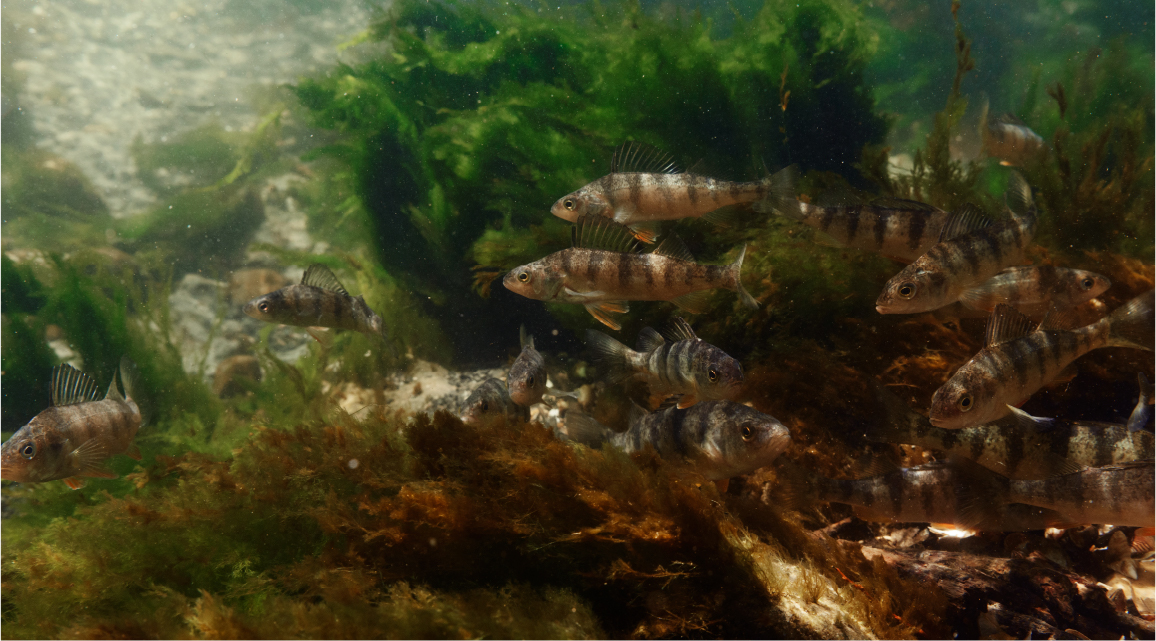 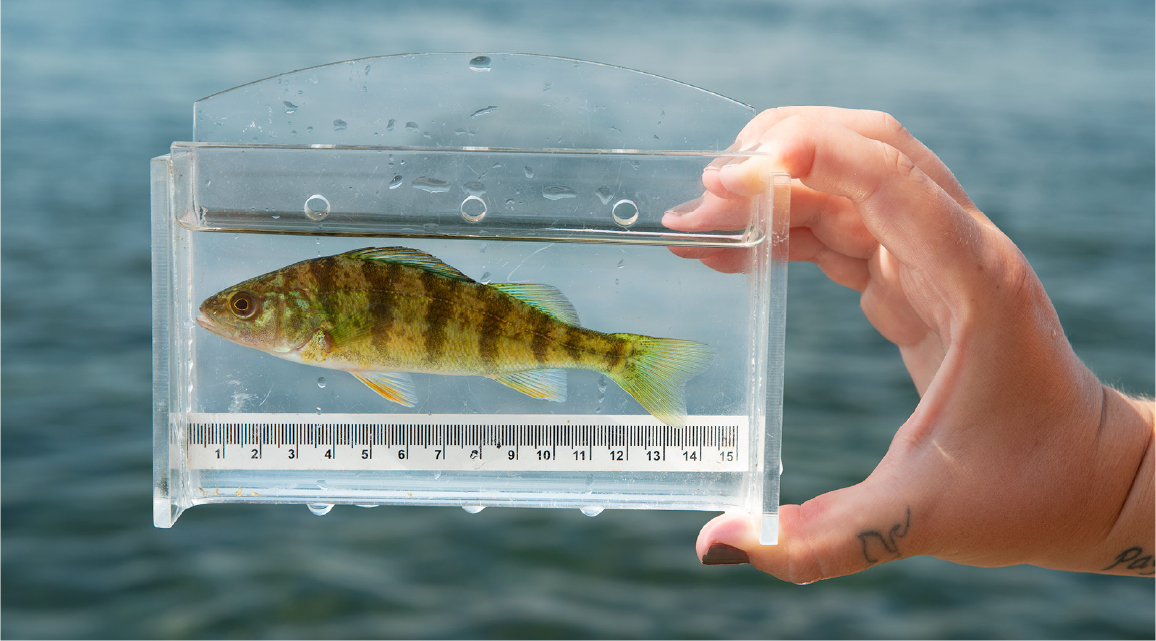 Long-term fish biomonitoring programs were initiated in the late 1970s and 1980s in the Upper St. Lawrence River. If we look at historical trends from fisheries catch over the past century, we see that these monitoring programs began when yellow perch were at peak abundances in the river. This peak was followed by a consistent decrease in relative yellow perch abundance from the late 1970s through to the early 2000s. Since the early 2000s, yellow perch populations have either stabilized or recovered in the Thousand Islands, Lake St. Lawrence, and the Quebec portion of Lake St. Francis. However, in the Ontario portion of Lake St. Francis, yellow perch relative abundance dropped in 2010 and has remained low. There are currently no long-term monitoring programs to assess fish populations in the Brockville and Cornwall/Massena/Akwesasne sections of the river. 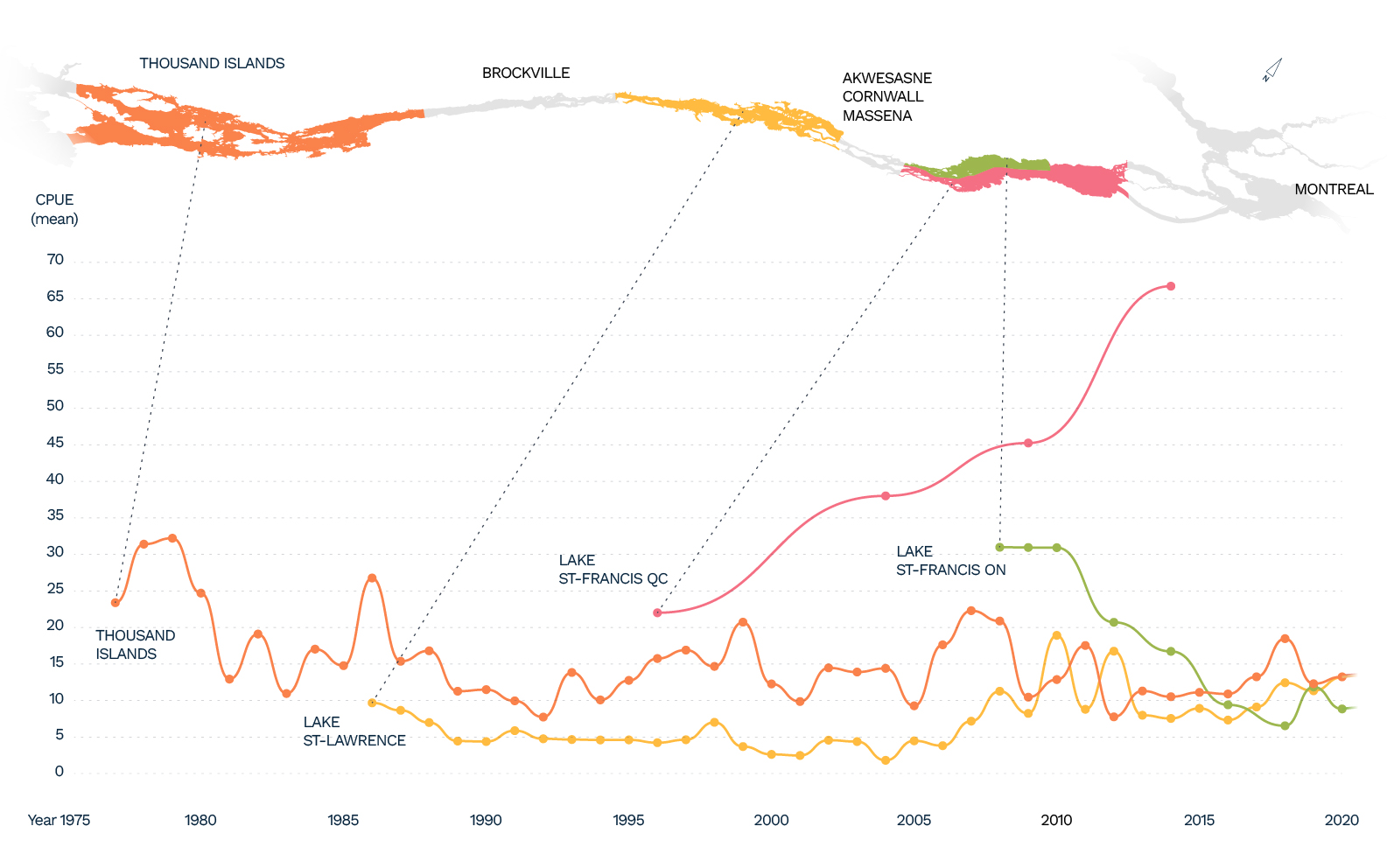 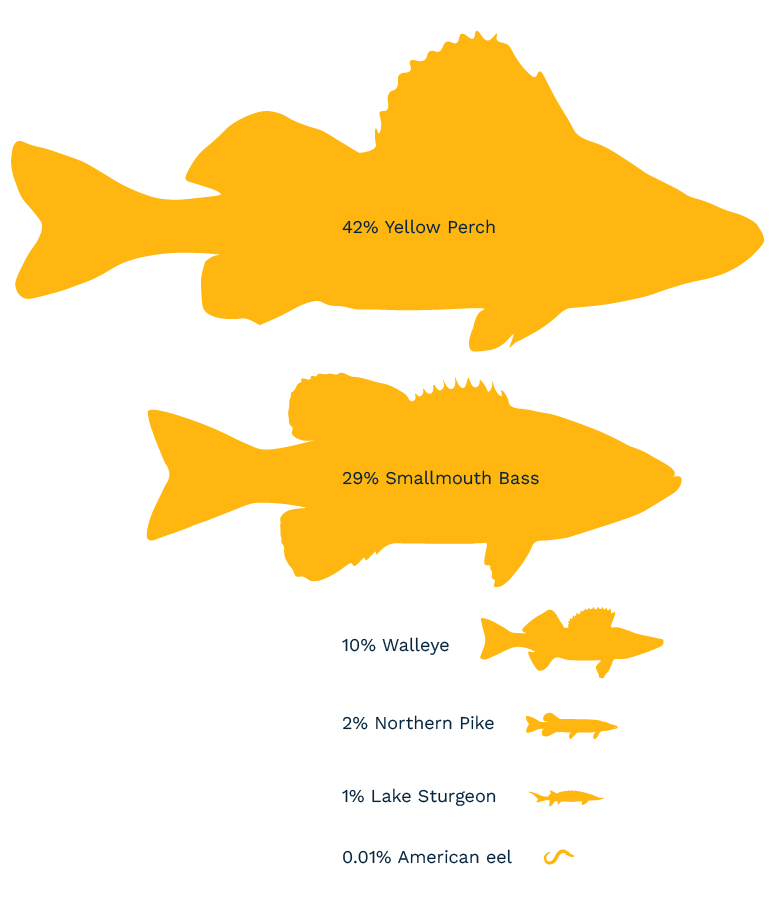 Nutrients, such as phosphorus, facilitate the growth of plants and invertebrates, generating food and creating habitat for yellow perch. However, an excess of nutrients can also have negative impacts on aquatic ecosystems, such as producing algal blooms. The Lake Ontario-St. Lawrence River basin experienced nutrient enrichment, derived from sources such as phosphate-based detergents and domestic sewer systems, from the late 1940s until the 1970s. In order to restore and protect water quality, the governments of Canada and the United States signed the Great Lakes Water Quality Agreement in 1972, which reduced the input of total phosphorus into the Great Lakes and therefore the St. Lawrence River. Total phosphorus is positively correlated with the number of yellow perch in the Upper St. Lawrence River. Following the reduction in total phosphorus, we also see a reduction in yellow perch populations along with a shift in food web dynamics. 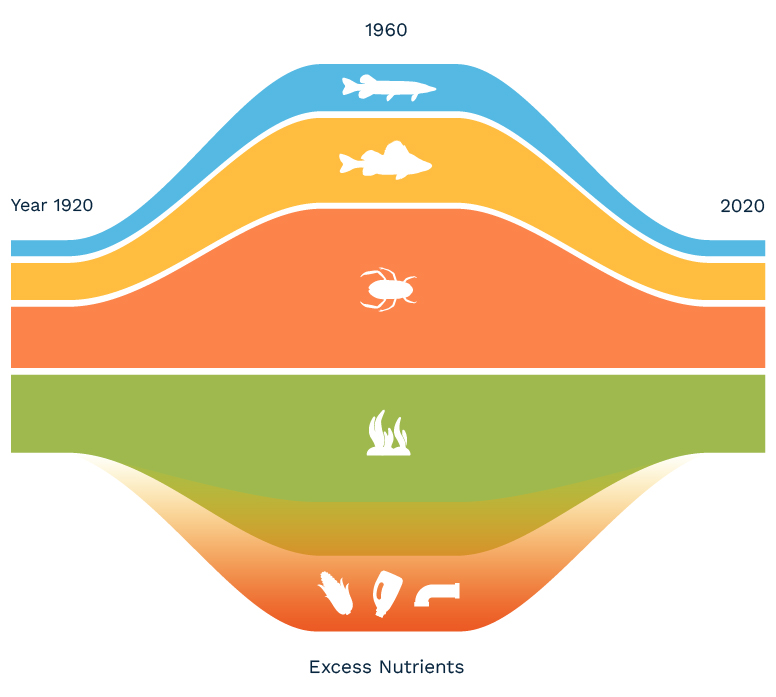 In the 1970s, double-crested cormorant populations in the Great Lakes-St. Lawrence River basin began to recover following the banning and restriction of certain pesticides, including DDT, and have continued to grow to reach unprecedented numbers. Up until the early 2000s, yellow perch were an important food source for cormorants in the Upper St. Lawrence River, making up roughly 46% of their diet. Over the course of the 2000s, however, a steady increase in the round goby population in the river contributed to a shift in cormorant diets. By the end of the decade, cormorant diets were made up of 49% round goby and only 20% yellow perch. As such, predation pressures on yellow perch resulting from the growing cormorant population have been at least partially offset by cormorants’ increased reliance on round gobies as a key prey species. 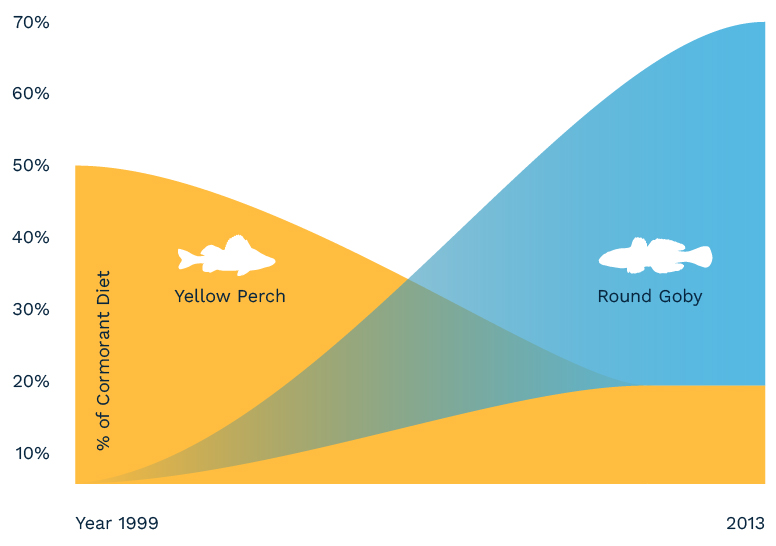 Pressure from commercial and recreational fishing

Fisheries have a direct impact on fish populations in the Upper St. Lawrence River and their impacts on yellow perch have been particularly notable in Lake St. Francis. The recreational fishery in the Ontario portion of Lake St. Francis peaked in 2009 with over 110,000 lbs of yellow perch harvested and the recreational harvest dropped with less perch caught per hour in the following years. With respect to commercial landings of yellow perch in the Ontario portion of Lake St. Francis, the quota increased threefold in 2010 raising harvests to 18,832 lbs that year. The patterns documented by the monitoring and harvest data indicate that the combined pressure of recreational and commercial fishing activities in this area were greater than the yellow perch population at the time could sustain with contemporary nutrient levels. 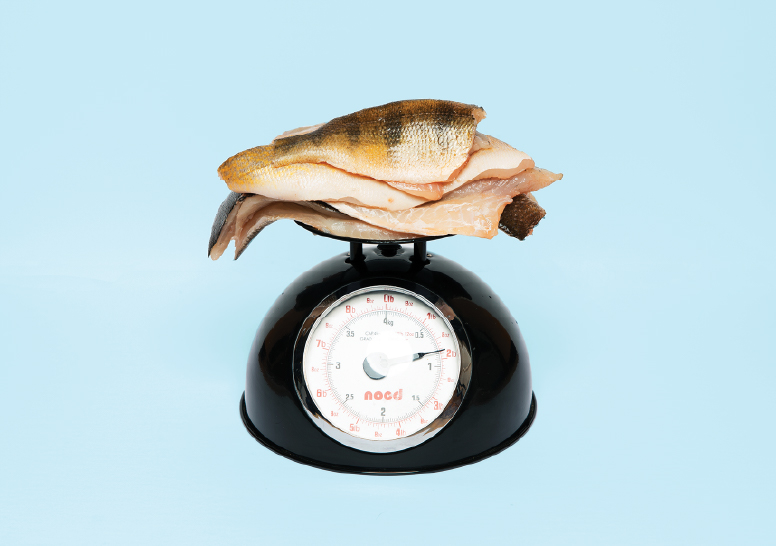 Nutrient dynamics have altered the status of the river, affecting the number of yellow perch the river can support. With the decline in nutrient levels, following measures to reduce phosphorous pollution, the river cannot support as many yellow perch as it could in the 1950s and 1960s. To maintain current yellow perch populations in the Upper St. Lawrence River, fisheries regulations need to be adapted to accommodate the changes in nutrient levels, and therefore the carrying capacity of the river. Monitoring of the population size of double-crested cormorants, a major predator of the species, is recommended as the birds can also put pressure on yellow perch populations. Data gaps identified in this report, including lack of long-term monitoring data in Brockville and Cornwall/Massena/Akwesasne sections, need to be filled to provide a better picture of the Yellow Perch populations in the whole of the Upper St. Lawrence River.

What can I do?

Get outside and use the power of image recognition technology to identify wildlife, plants and fungi, and learn about the many organisms all around you. Earn badges for observing different types of species and participating in challenges.

The next time you’re out fishing, why not take part in citizen science by using the MyCatch app to identify and track your catch? This app can be used recreationally or in angling tournaments, and the data collected can later be used to help protect these fish species!

Contribute to citizen science by sharing your species observations on iNaturalist. Simply upload a perch photo and the app will provide suggestions for identification, information on its traits and allow other naturalists to share their own suggestions and observations.

A podcast that features subjects and people of special interest to the future of fish and fishing. Includes interviews with lead researchers and local experts in the field of fish biology, aquatic habitat, and sustainable fishing.

Document with information on the Ontario fishing regulations.

Document with information on the Quebec fishing regulations.

Document with information on the New York fishing regulations.

Kate is a young, knowledgeable naturalist, with a deep love and curiosity for the natural world. She has translated this passion into lifelong learning, a career, and through it, she is making a contribution to the Great River Rapport.

Steve DeRochie sees trapping as a role and a responsibility that will make a positive impact on the future of the wetlands at Cooper Marsh.

Norm Seymour lives and breathes ecology. He’s spent a lifetime studying it, teaching it, and writing about it. Now he’s sharing everything he knows for the benefit of Great River Rapport.

Abraham Francis is both grounded by Indigenous and scientific knowledge. That’s a powerful combination that serves his community and all others who orbit him. 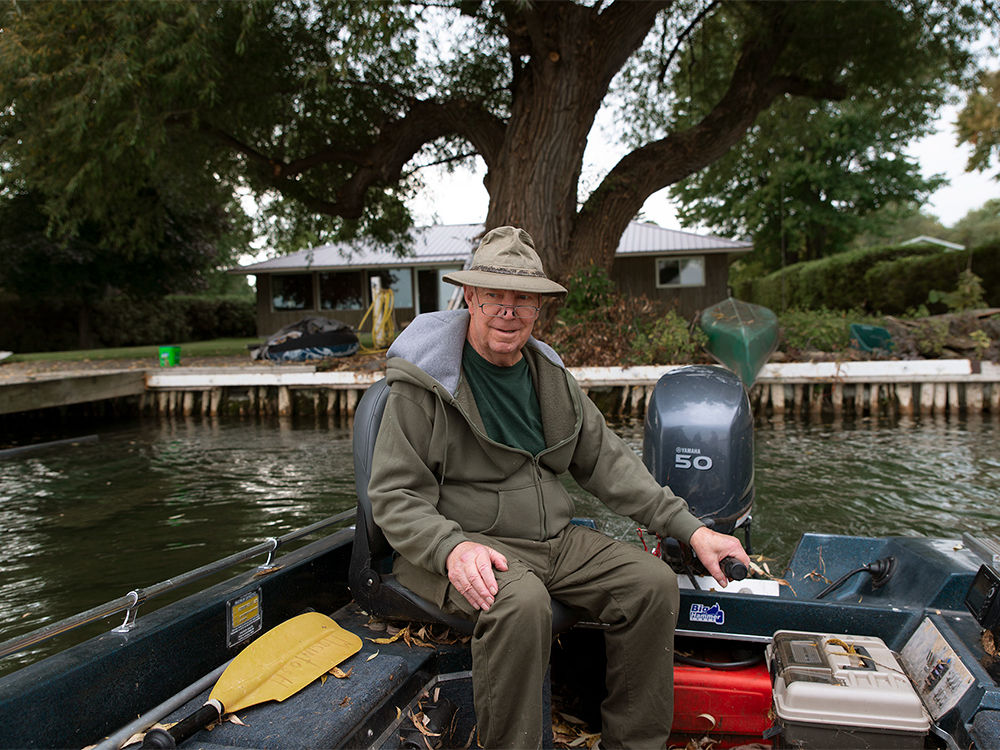 A boat ride on the St Lawrence with Ian Macintosh is a trip back in time and a painful reminder of tragedy.

There’s a new generation of avid anglers in our midst—and they’re filled with passion, generational knowledge, and a deep connection to the river. Meet one of them, Mackenzie Petrie.

For Jessica Shenandoah, foraging is all about preserving traditions, amplifying Indigenous knowledge, building community, and protecting plants for future generations to enjoy.

We all connect to nature in different ways. For some, it’s through a walk, hike, snowshoe or cross country ski in the great outdoors. For others, it’s heading out to a river to paddle a kayak, canoe, or paddleboard. For foragers, that bond comes from collecting wild foods.

With a connection to the great river dating all the way to the construction of the moses-saunders dam, Ron MacDonald is a man-in-the-know when it comes to changes to our local waterway.

Henry Lickers – Dare to be GREAT

Henry is six feet tall but his height belies his weighty presence. A man rooted firmly in his Haudenosaunee culture he holds the great gift of connecting cultures.